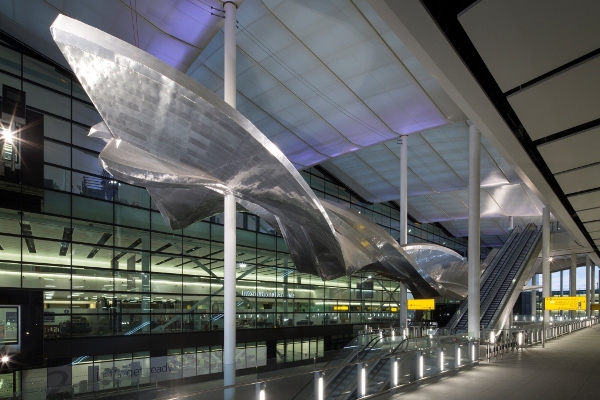 Campbell Ventures is currently delivering project management expertise to operationalise the new London Heathrow airport Terminal 2 for Heathrow Airport Limited. The new Terminal 2 is the latest stage in Heathrow’s £11 billion investment transformation. Over the course of the next six months, 26 airlines from across the airport will move their operations from their current terminals into Terminal 2 starting with United Airlines on 4 June 2014. The new terminal will be officially opened by the Her Majesty The Queen on 23rd June 2014. The Queen will be accompanied by his HRH the Duke of Edinburgh.

Today (23 April) unveiled Terminal 2’s iconic new Slipstream sculpture, by renowned British artist Richard Wilson. It is set to become one of Britain’s most viewed public sculptures, seen by up to 20 million passengers a year.

Weighing 77 tonnes and measuring 78 metres, the sculpture’s twisting aluminium form is inspired by the world of aviation and captures the imagined flight path of a small stunt plane. It is supported by four structural columns and is suspended 18 metres above the ground as it carves through the entrance court of Terminal 2.

Slipstream will be the first and last impression of the United Kingdom for passengers travelling through Terminal 2 and this ambitious sculpture took over two years to create. The sculpture was manufactured in Hull in 23 giant sections and was then transported, piece by piece, to Heathrow in June 2013.

Richard Wilson commented: “After over two years of hard work I am delighted to see Slipstream finally unveiled. Slipstream is a metaphor for travel, it is a time-based work that responds to its location and I feel honoured that Slipstream will go on to be seen by millions of visitors travelling to and from the UK each year”.

© Copyright Campbell Ventures – Improving the Performance of Your Business 2019. All Rights Reserved
Registered in England & Wales No. 7564761 VAT Registration No. 111193460